Curious to know why WordPress has long been the most popular content management system? Then, you need only look at the numbers.

There are many reasons why WordPress has stood the test of time. And when you look at these 35 eye-opening statistics from 2020, you’ll quickly come to realize what it is that makes this content management system so powerful.

If you’re still not impressed with how powerful WordPress truly is, then these statistics will change that.

Co-founders Matt Mullenweg and Mike Little launched WordPress in 2003 from the b2/cafelog blogging system. As of now, WordPress is 17 years old.

2. What’s Included In the WordPress Bill of Rights? 4 Freedoms.

WordPress holds a General Public License from the GNU, which outlines how the open-source software can be used and adapted by others.

This license is the basis for the WordPress Bill of Rights. It contains 4 freedoms:

There is no information available for how much WordPress.org is worth. (Hosted WordPress.com is a different matter, but that’s not the software you’ve come here to learn about.)

WordPress is supported by the WordPress Foundation and a new subsidiary called WordPress Community Support. So, any money put into the WordPress community (not into the product itself) comes from them.

According to the most recent financials from 2018:

So, supporting programs for the WordPress communities aren’t generating a ton of revenue.

To this day, WordPress.org still costs $0 to download and use. There are other costs associated with building a WordPress website, but the content management system itself is not one of them. 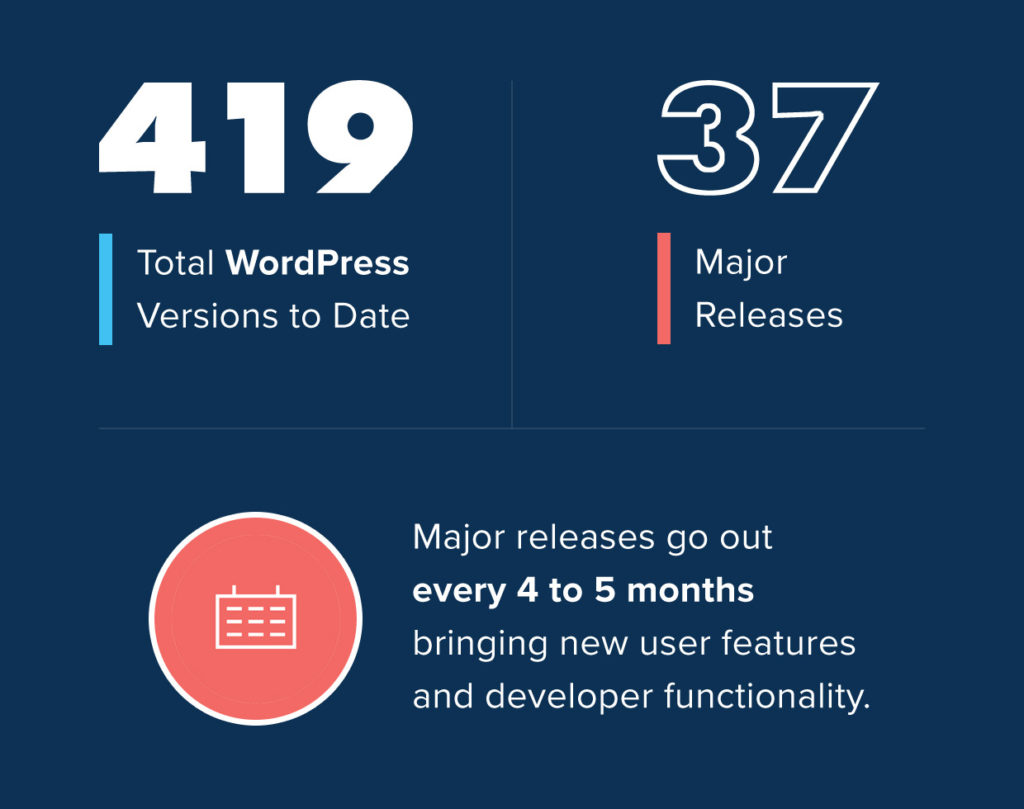 There have been a total of 420 versions of WordPress to date. Of which, 37 have been major releases.

Major releases go out every 4 to 5 months and bring with them new user features and developer functionality.

Minor releases go out whenever they’re needed. Usually, they fix bugs, patch vulnerabilities, or make other small enhancements to the platform.

6. How Many Users Currently Have the Latest Version of WordPress? 35+ Million.

It has been downloaded over 35.6 million times.

7. How Many Lines of Code Have Been Written for the WordPress Core? 346k. 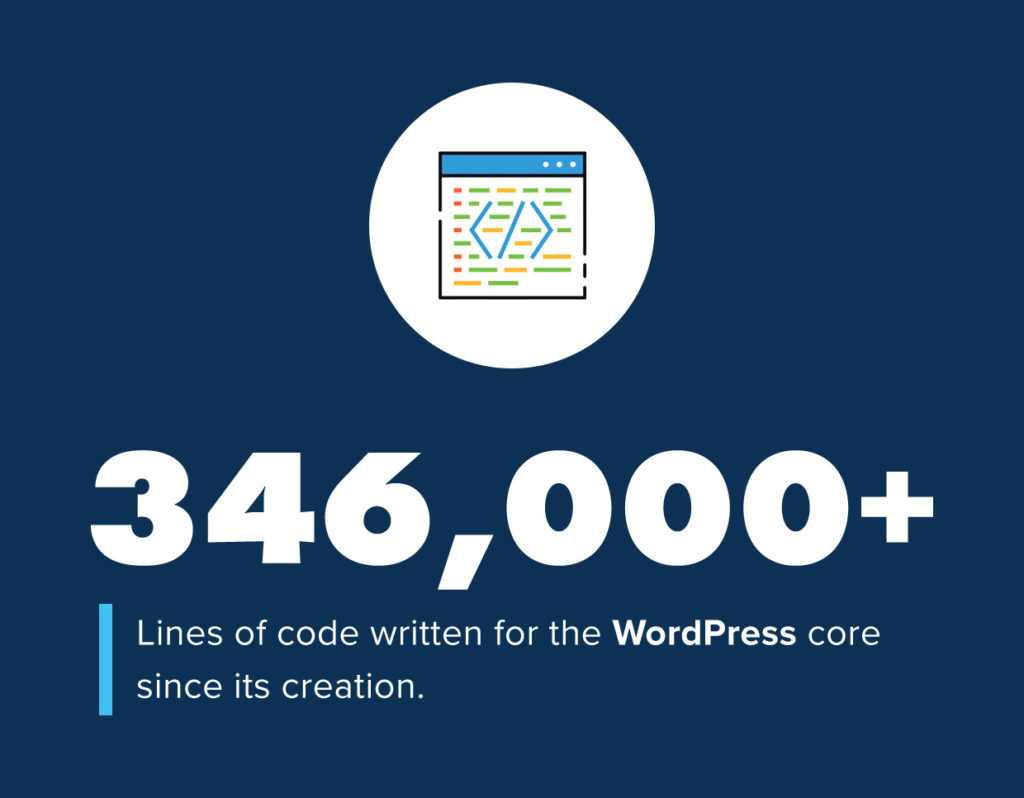 There have been over 346,000 lines of code written for the WordPress core since its creation.

8. How Many Languages Is WordPress Available In? 196.

WordPress can be translated into 196 languages at this time.

9. How Many Employees Does WordPress Have? 1,2k.

WordPress is an open-source project. As such, most of the code written for it has been contributed (i.e. for free) by thousands of developers.

If WordPress has any employees, the data is not available. However, it has a massive Community Leadership team that objectively oversees everything. This team consists of:

They also have 1,200 official employees.

10. How Many WordPress Contributors Are There? ~50k.

Again, there’s no exact data on how many contributors there are to WordPress. Considering there’s always a call for new contributors, the number is most likely in the thousands.

The Five for the Future project was established in 2014 to encourage more organizations to lend 5% of their workforces to coding for WordPress.

With large agencies and corporations like the New York Times, 10up, Automattic, Human Made, and Conde Nast contributing code, the number actually could be in the tens of thousands today. 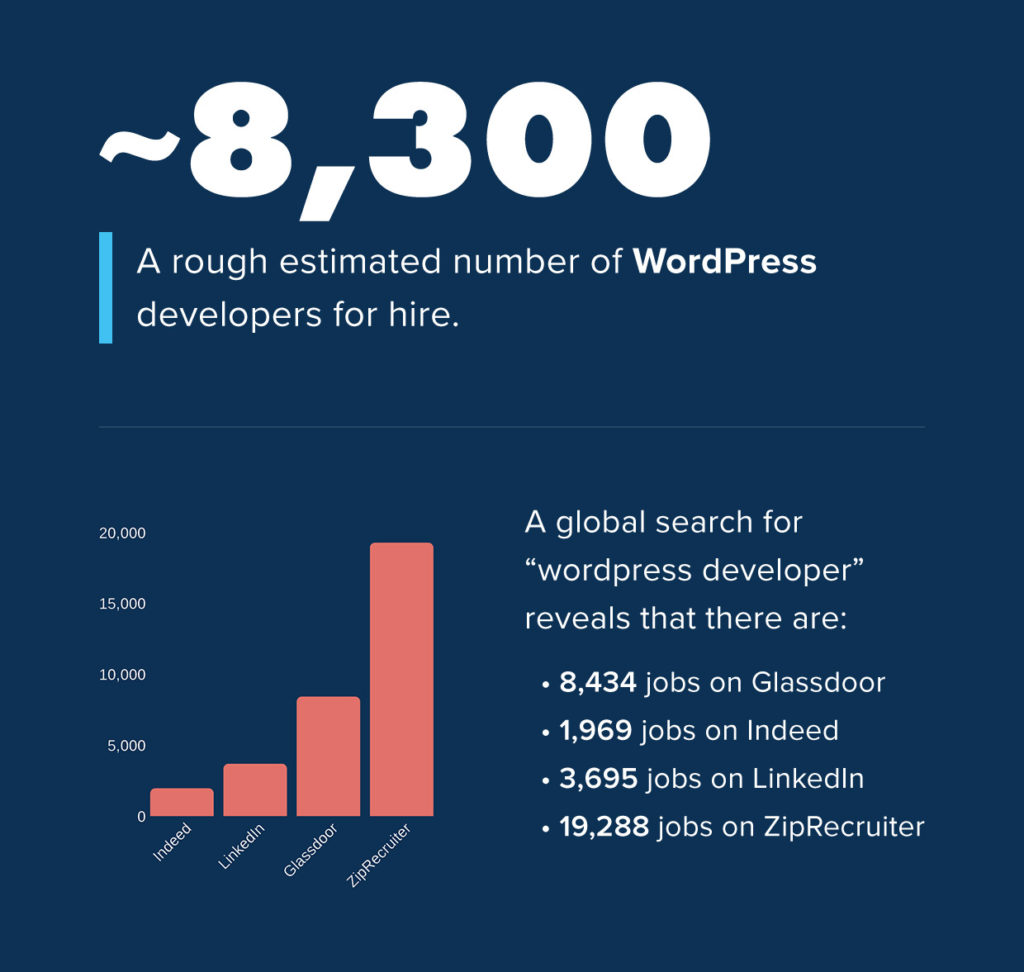 There’s no easy way to tell how many WordPress developers there are as some developers freelance, some own their own business, and others work for agencies.

Although there’s probably a bit of overlap in the number of jobs shown, it’s probably safe to take an average of the numbers above and say there are roughly 8,300 WordPress developers for hire.

12. How Much Does the Average WordPress Developer Make? $60k. 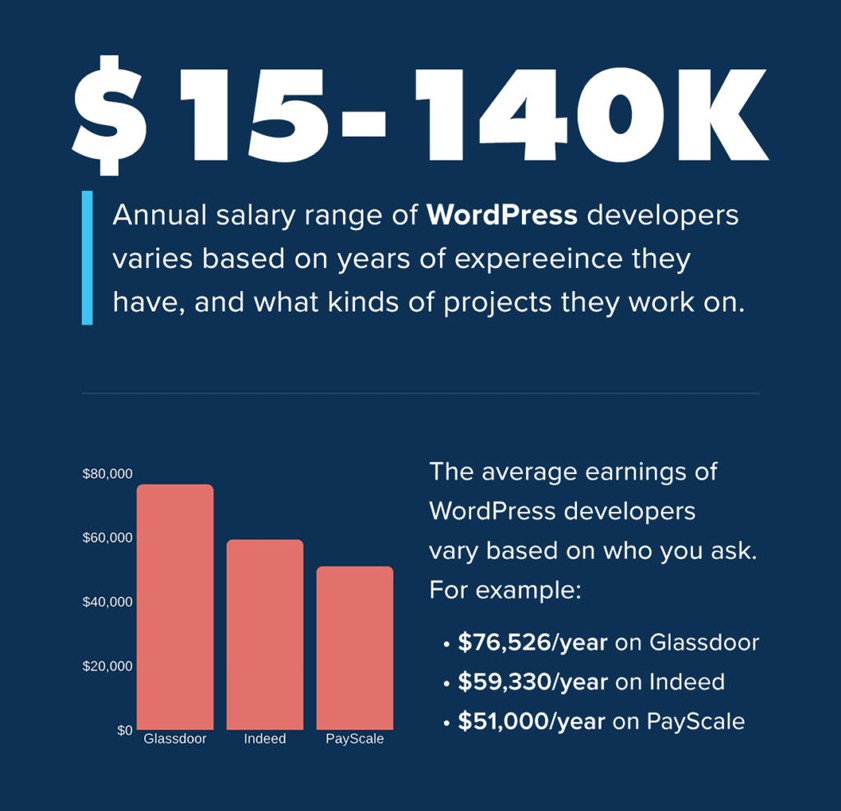 The average earnings of WordPress developers vary based on who you ask. For example:

It ultimately depends on what kind of WordPress developer they are, how many years of experience they have, and what kinds of projects they work on. According to data from these resources, it looks as though salaries can range anywhere from $15,000 to $140,000 a year.

The WordPress community stretches beyond those who contribute code to the core. WordPress developers, designers, business owners, and enthusiasts are part of this community as well.

One of the places where they go to learn more about WordPress, to meet like-minded folks, and to connect with WordPress companies is at WordCamps. The first of which was hosted in 2006 in San Francisco.

WordCamp has long since grown beyond the single event in San Francisco. As of writing this, there have been:

Another way the WordPress community connects is through Meetup.com.

Officially, there are 1,660 groups and 782,141 members that participate in these local WordPress chapters. 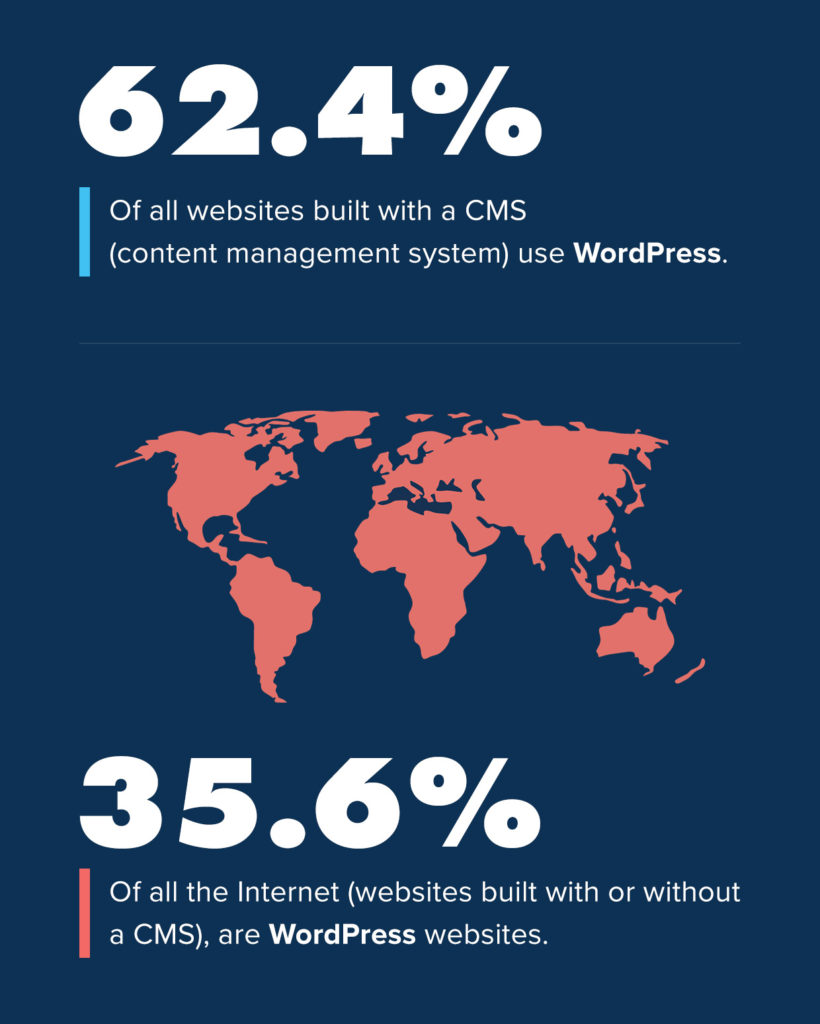 While there’s a lot of competition out there, WordPress remains the leading content management system (CMS) across the Internet.

Many of the most popular, high-traffic, and top-earning websites are built with WordPress. For example:

Of the top 1 million built with open-source technologies (ones that can be modified and redistributed as WordPress can), 74% are built with WordPress.

WooCommerce, the top eCommerce plugin, and toolkit for WordPress were founded in 2008 by three WordPress enthusiasts.

20. How Many People Have Downloaded WooCommerce? 83M.

Even though WooCommerce isn’t one of the easiest eCommerce platforms to use, it’s the leading eCommerce technology for WordPress because it provides the best experience for end-users.

21. How Many Online Stores Are Built With WooCommerce? 28% of all online stores. 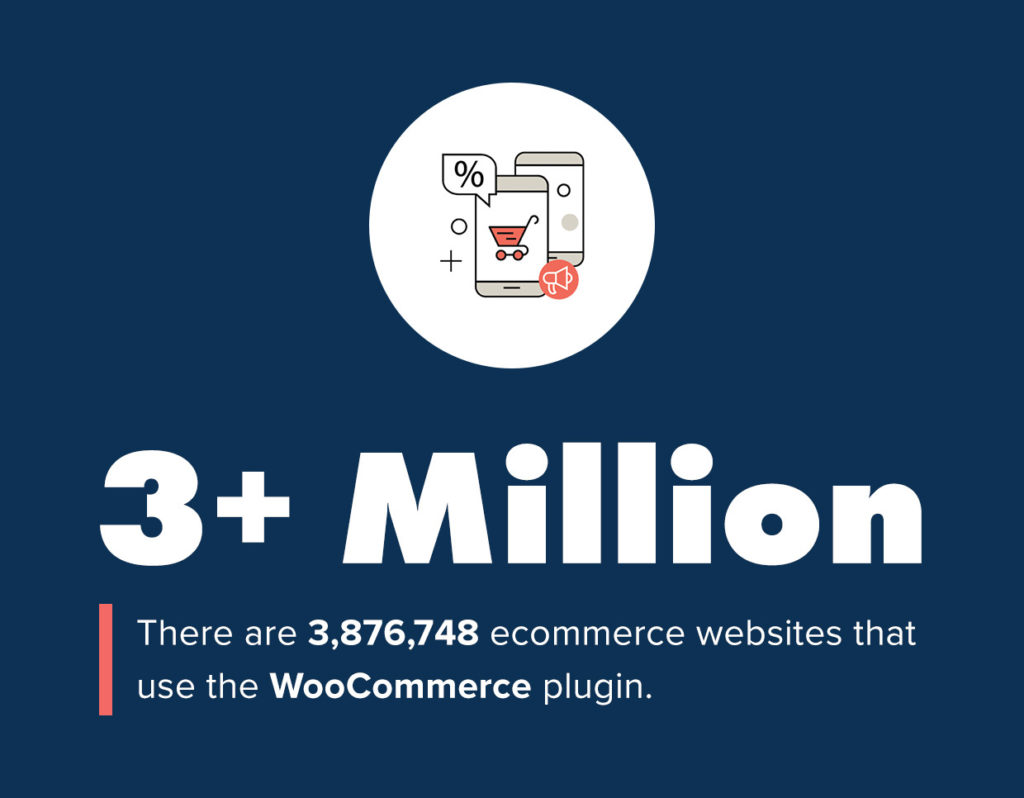 There are 3,876,748 eCommerce websites that use the WooCommerce plugin.

22. How Many WordPress Websites Use WooCommerce? 16.4%

WooCommerce isn’t a self-sufficient eCommerce platform like its competition, which makes it more versatile in how it can be used. For instance, a business can use WooCommerce to sell services and products on its regular website, so WooCommerce users aren’t always for full-fledged online stores.

So, in terms of how many WordPress websites have WooCommerce enabled, 16.4% of them do.

The WordPress repository of free themes currently contains over 7,400 of them. However, this does not account for the hundreds of WordPress themes that are available through third-party developer websites.

There are a number of places where users can purchase a premium theme for WordPress. The ThemeForest marketplace alone has over 12,000.

Like with free themes, however, this number doesn’t accurately depict how many are actually available online as developers and publishers often sell them through their own websites. There are likely hundreds (if not, thousands) themes more.

25. What Is the Most Installed WordPress theme? “Twenty”.

A WordPress theme is a useful tool when it comes to building and designing a website. Although not every website owner or developer chooses to use a theme, WordPress requires all users to have at least one theme installed on their server.

This may be why the most installed WordPress theme is one of WordPress’s own default “Twenty” themes (the starter theme it releases each year to users).

However, Astra and Elementor, which are the non-default WordPress themes, also have over 1M+ active installations on the WordPress repository.

26. How Many Free Plugins Are Available for WordPress? 55k.

The WordPress plugin repository currently contains 55,463 free plugins. WordPress users can find free plugins outside of WordPress, though most plugins on developer sites are paid.

Similar to the question about paid themes, it’s difficult to tell exactly how many paid WordPress plugins there are.

The CodeCanyon marketplace has over 7,200 WordPress plugins. However, many developers sell upgrades to their free plugins on their websites, so this number is only the tip of the iceberg.

28. What Is the Most Installed WordPress Plugin? 5+ M. 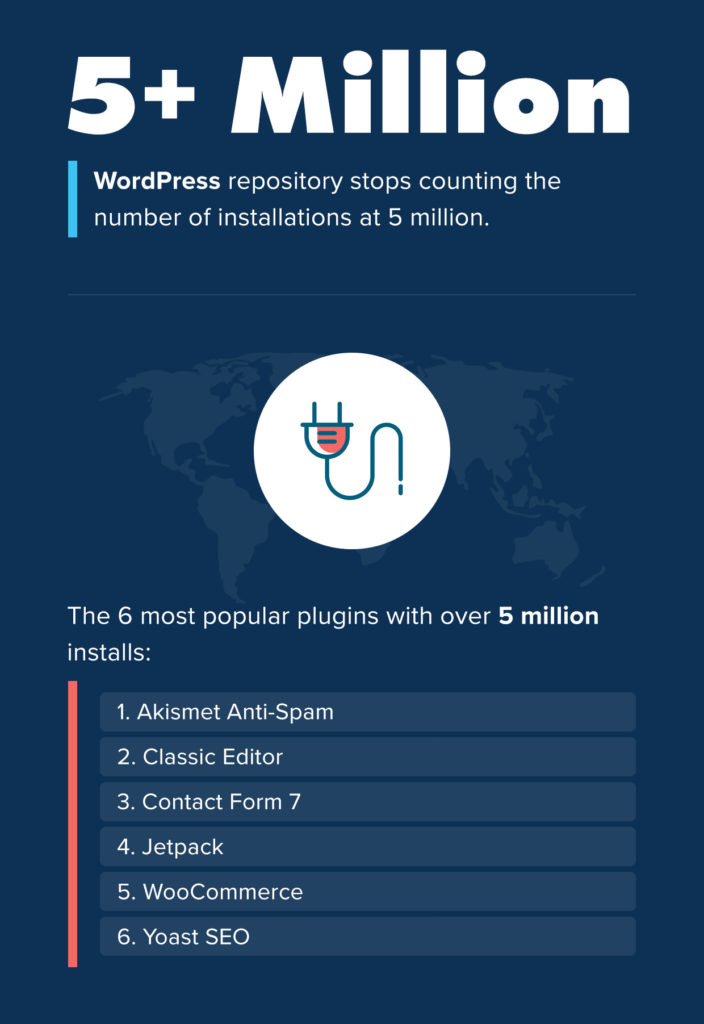 Without WordPress plugins, users would have to code advanced functionality and features into their websites on their own. That’s why they’re such a popular way to extend the power of a website.

However, there isn’t one winner when it comes to “most installed” as the WordPress repository stops counting the number of installations at 5 million.

That said, there are 6 most plugins with over 5 million installs:

29. How Many Page Builders Are Available for WordPress? Many.

By default, WordPress users are given the Gutenberg block editor to build and design their websites with.

However, many users prefer to use something else, as evidenced by the popular plugins list above (the “Classic Editor” plugin takes users back to the original WYSIWYG editor).

Further proof of WordPress users’ desire to build websites by other means is the growing popularity of page builder plugins.

There are over a dozen page builder plugins available, but only about 5 or so of them are well-reviewed and top-ranked.

30. Where Are Vulnerabilities in WordPress Most Commonly Found? ~150k. 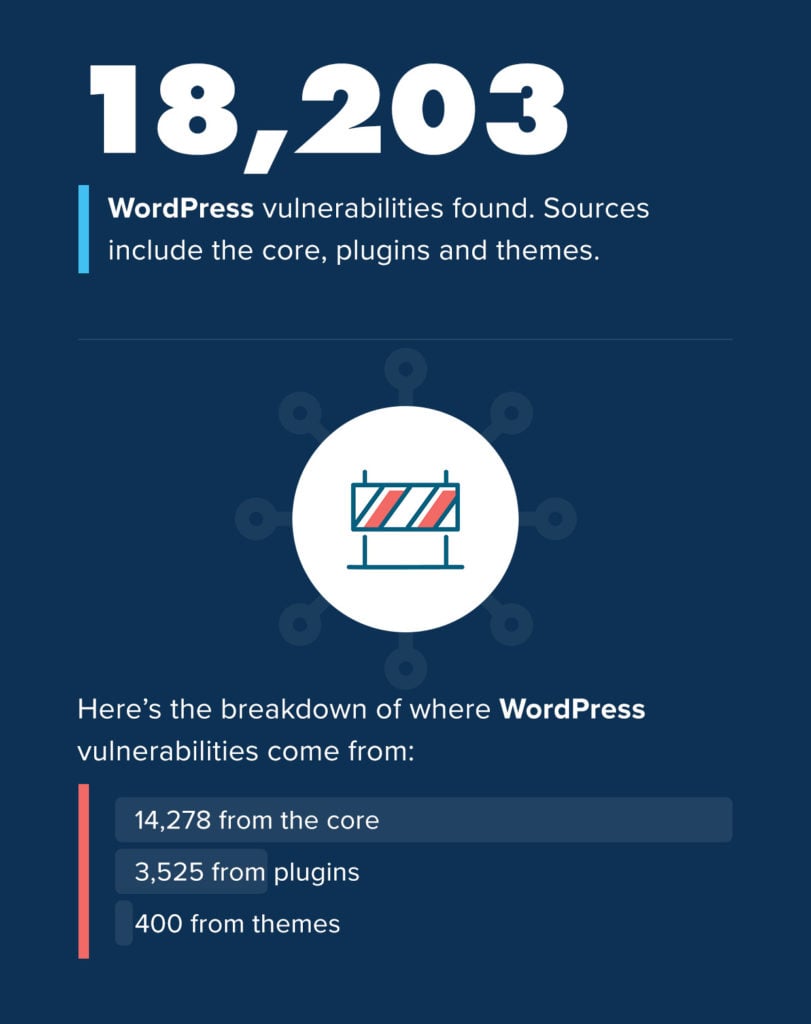 While the WordPress team works hard to keep its platform secure, it’s not just the core code that may open the door for hackers to step inside user websites.

Most recently, there were 18,203 vulnerabilities found. Here’s the breakdown of where they come from:

31. How Many WordPress Sites Get Hacked Each Year? 60k. 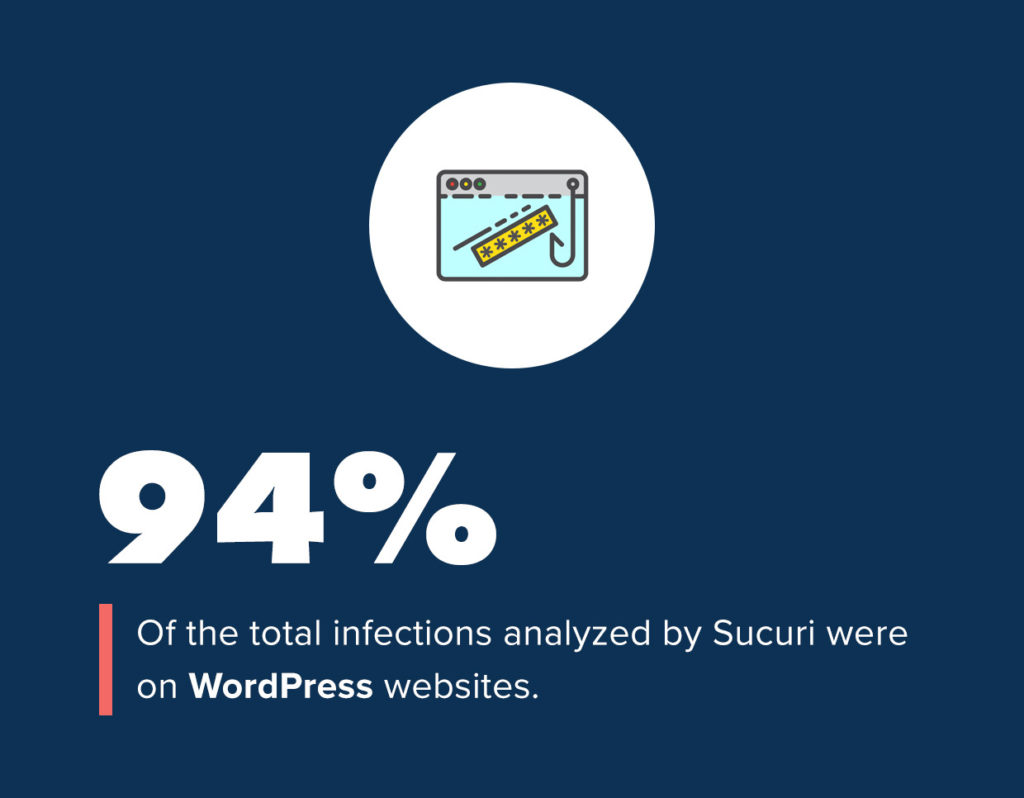 Sucuri released its hacked website threat report based on the sample comprised of 60,299 websites cleaned, more than 98 million SiteCheck scans, and an analysis of 170,827,313 attack attempts.

Of the total infections, 94% were on WordPress websites. Yet another reason why it’s crucial to prioritize WordPress security.

32. What Is the Most Common Kind of Security Attack on WordPress Sites? XSS.

While there are many ways a hacker can attack a WordPress website, the most common vulnerability is cross-site scripting attacks.

A cross-site scripting (or XSS) infection means that a hacker has gained access to a website and injected malicious code into an otherwise legitimate web page. The goal is to infect visitors’ browsers with the infection.

Of the total types of vulnerabilities found on WordPress websites, there were 1,585 XSS — more than any other.

As of writing this, only 34.9% of WordPress sites have upgraded to version 5.3. All the rest are using older versions of WordPress that are no longer supported and prone to vulnerability.

Although the core of WordPress is most commonly where vulnerabilities are found, what that data really refers to is all of the versions of WordPress.

While the WordPress team works diligently to release new versions of its software — with enhanced features and security patches — not every user takes the time to upgrade to the latest version. And this is why all these core vulnerabilities are such a huge problem.

With so many users using outdated WordPress software, they’re putting their websites and visitors at risk. In 2019, 49% of hacked WordPress websites happened as a result of outdated CMS technology.

35. How Many Plugins Have Not Been Updated Recently? ~35k. 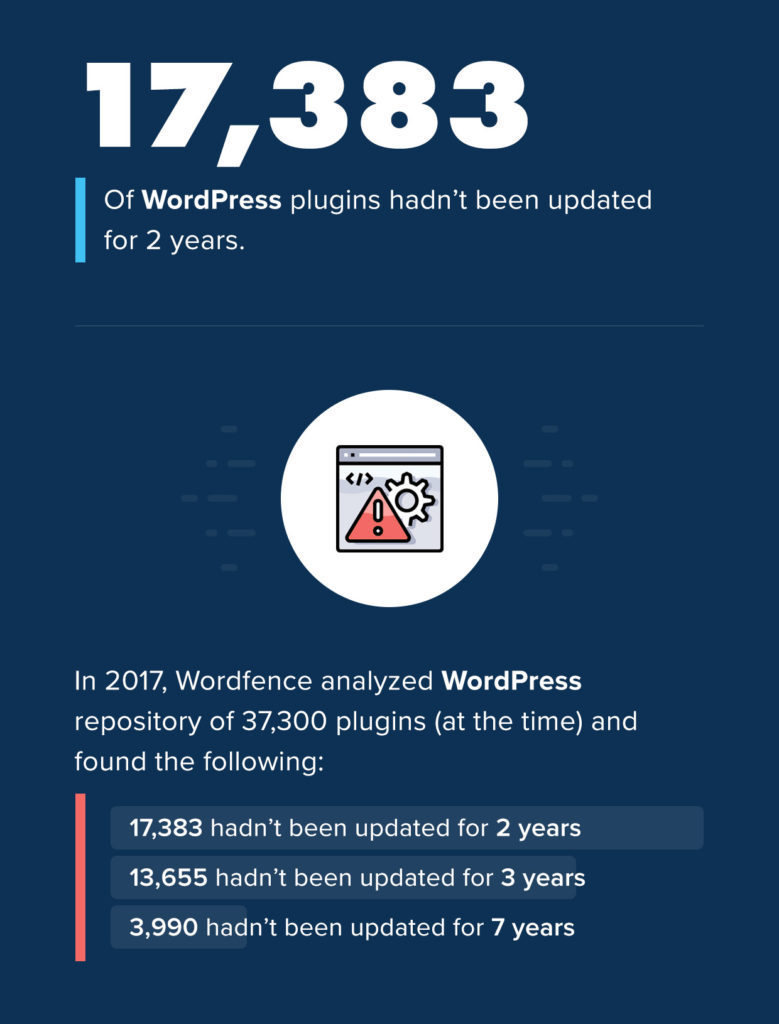 This is what WordPress refers to as “deprecated plugins”. When a developer fails to update their plugin software and actively support it, a warning is shown to users in the repository.

It’s difficult to track down how many there are. However, back in 2017, Wordfence did some analysis on the WordPress repository of 37,300 plugins (at the time) and found the following:

That was just a few years ago, which means there are likely still tens of thousands of plugins that aren’t supported and possibly putting WordPress users at risk.

There’s no current research on this when it comes to themes.