It’s easy to get web developers and web designers mixed up – they both work on websites, use similar tools, and sometimes have similar skills. Or that’s what it looks like from the outside looking in.

In reality, designers and developers have very distinct roles and are responsible for different aspects of building a website.

Here’s an easy guide on how to tell the roles apart.

Confused about the roles and responsibilities of web developers vs. web designers? You’re not alone.

Many still struggle to tell these two professions apart. While web designers and web developers work hand in hand to ship new websites to the world wide web, their roles are distinctly different.

A great way to put these career paths into context is to think about the process of building a house.

You need an architect to come up with a vision of the house – the visual elements, the floor plan and layout, materials, and the general look and feel of the space. And then you need construction workers to take these architectural drawings and execute them, turning a vision into a building.

Can you be both a web designer and a developer?

Let’s put it this way — countless people are great at both math and literature. Fundamentally, there isn’t anything stopping you from mastering both ends of the skills spectrum. So the short answer is, yes, you can. The only catch to becoming a pro in both fields is that it might take you twice as long.

What is Web Development?

Web development is the process of building, creating, and maintaining websites or web applications. It’s the work that turns a wireframe into a functioning website, ensuring it runs smoothly, loads fast, and delivers a seamless experience to the user.

Who is a Web Developer?

Development skills are some of the most sought-after skills in the market, making it a popular and, often, well-paid career path. That’s mostly because of the rich and varied arsenal of skills a good developer will need to meet the job requirements.

Web developers, or ‘devs’, juggle various coding languages to build and maintain websites. The programming languages they use will depend on the type of tasks they’re performing.

Now let’s look at what web developers in each role do.

A front-end developer is responsible for coding the mockup design for the website. Leveraging several programming languages (mainly HTML, CSS, and JavaScript), a front-end dev will implement the site’s layout, visual elements, and interactivity.

A back-end developer often referred to as ‘the engineer’, will work behind-the-scenes, writing and maintaining programs that power the frontend. This includes looking after the server that hosts the website, maintaining the application and the database. Back-end developers leverage a variety of server-side languages, such as PHP, Python, Ruby, and Java.

A full-stack developer has sufficient knowledge in both front-end and back-end development. With a well-rounded understanding of how the web works on all levels, full-stackers make sure the website’s front-end and back-end tie in and work smoothly together. Full-stack developers may also be expected to suggest and maintain the best practices, anticipate tech issues, and contribute to the overall development strategy.

Front-end developers create the on-screen reality. What starts as a mockup in design software has to be translated into a scrollable, clickable website, and that’s exactly what a front-end dev does.

The back-end ecosystem, on the other hand, is what powers the website. Think of it as the brain of a site that elegantly combines the server, the database, and the server-side applications to function in harmony.

How do you keep up with the tech requirements?

Pulling together a well-balanced toolkit that covers all aspects of web development is a great way to stay on top of your game:

What is Web Design?

Web design is the process of researching, planning, conceptualizing and arranging content or design elements online.

Who is a Web Designer?

A web designer is responsible for the look and feel of a website. The person is usually well-versed in color schemes, graphic design, typography, and information flow.

Besides designing user interfaces, web designers are also responsible for researching and understanding the end user’s needs and motivations. Equipped with this knowledge, they can create enjoyable user experiences that streamline conversions and keep visitors coming back.

Here’s what web designers in different roles do.

A UI designer concerns himself with building clean and appealing user interface designs based on the research gathered by UX designers. UI designers are responsible for every touchpoint and interaction between a user and a device — be that a computer, a mobile app, or a car dashboard.

While there’s some overlap between UI and UX designers’ roles, the latter is responsible for figuring out the needs of the site’s users (and potential users), determining user stories, creating user personas, and developing prototypes, and carrying out user testing. A UX designer must also ensure that there’s a logical flow on the website, that all interactions are intuitive and meet user needs.

A visual designer role is best described as a hybrid role between a graphic designer and a UI designer, with a bunch of extra skills thrown into the mix. Visual designers typically have a strong understanding of graphic design and branding and are experts at visual messaging. Their primary responsibilities involve aspects like typography, layout, spacing, imagery, and color palettes.

A practical, well-balanced toolkit can be an excellent asset for web designers. The time you save using helpful tools can be invested in more important tasks that drive quality results.

The problem is — web design tools are abundant in the market. Unless you know exactly what you need, it can be overwhelming to choose the best tool for the job.

We’ve collected the most popular web design tools and software for your convenience:

The internet is full of thousands of digital portfolios with hand-picked work examples and case studies that help web designers land their next role or project. Here are a few stellar examples of web design portfolios:

Now let’s move on to the money part.

In general, surveys show that web developers earn more than web designers, but it really depends on how you slice the data. Even among the different types of developer roles, there are significant differences in salaries. Your salary will depend more on the skills you bring to the table than your official job title.

Web designers earn a decent salary. While the pay can vary depending on the type of design role, location, and the seniority of the position, the average yearly salary of a web developer in the US is about $57k. 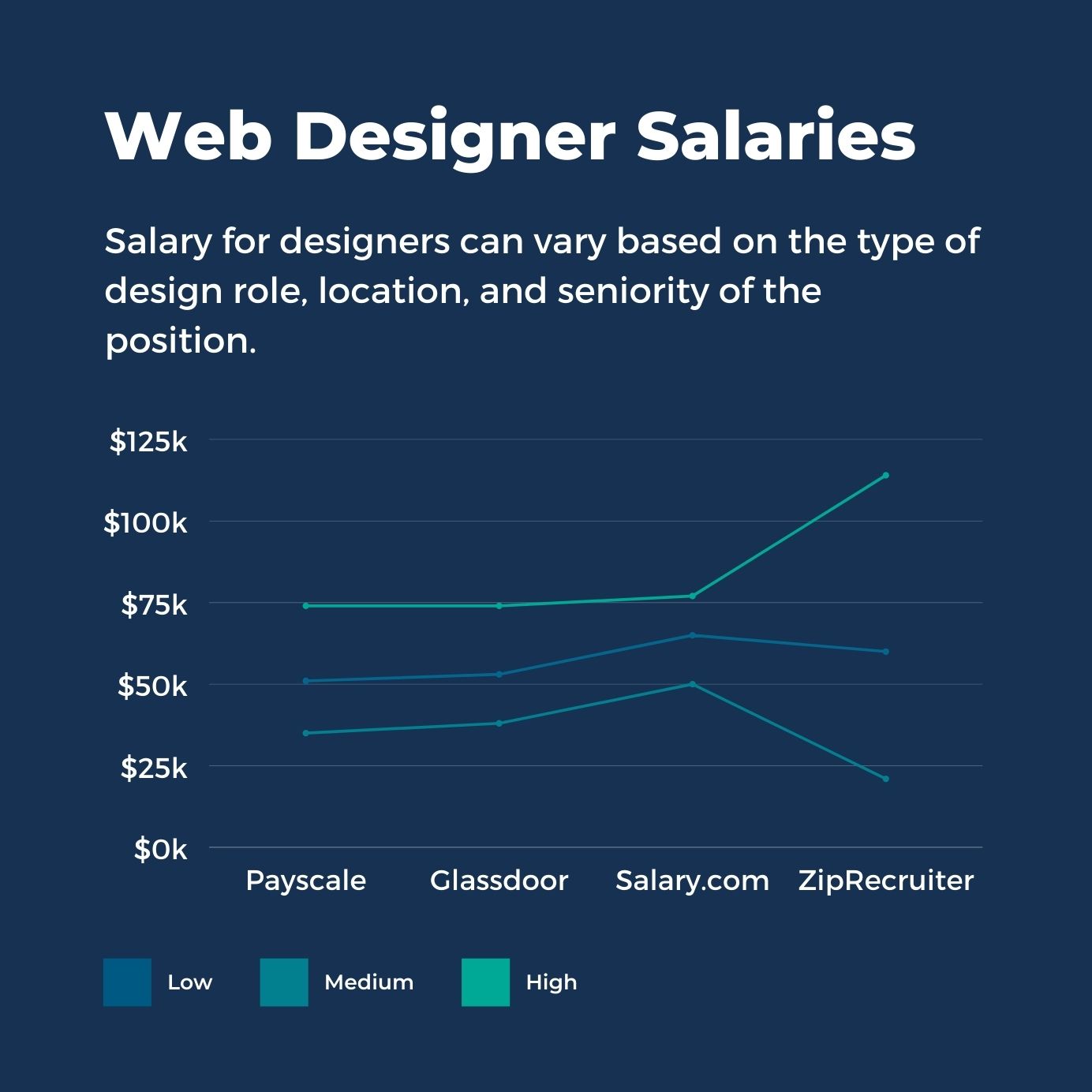 It’s worth pointing out that the available salary ranges differ significantly from source to source.

Looking at salary ranges for the different design roles, it’s rather apparent that the hybrid UI/UX designers rake in the highest earnings. 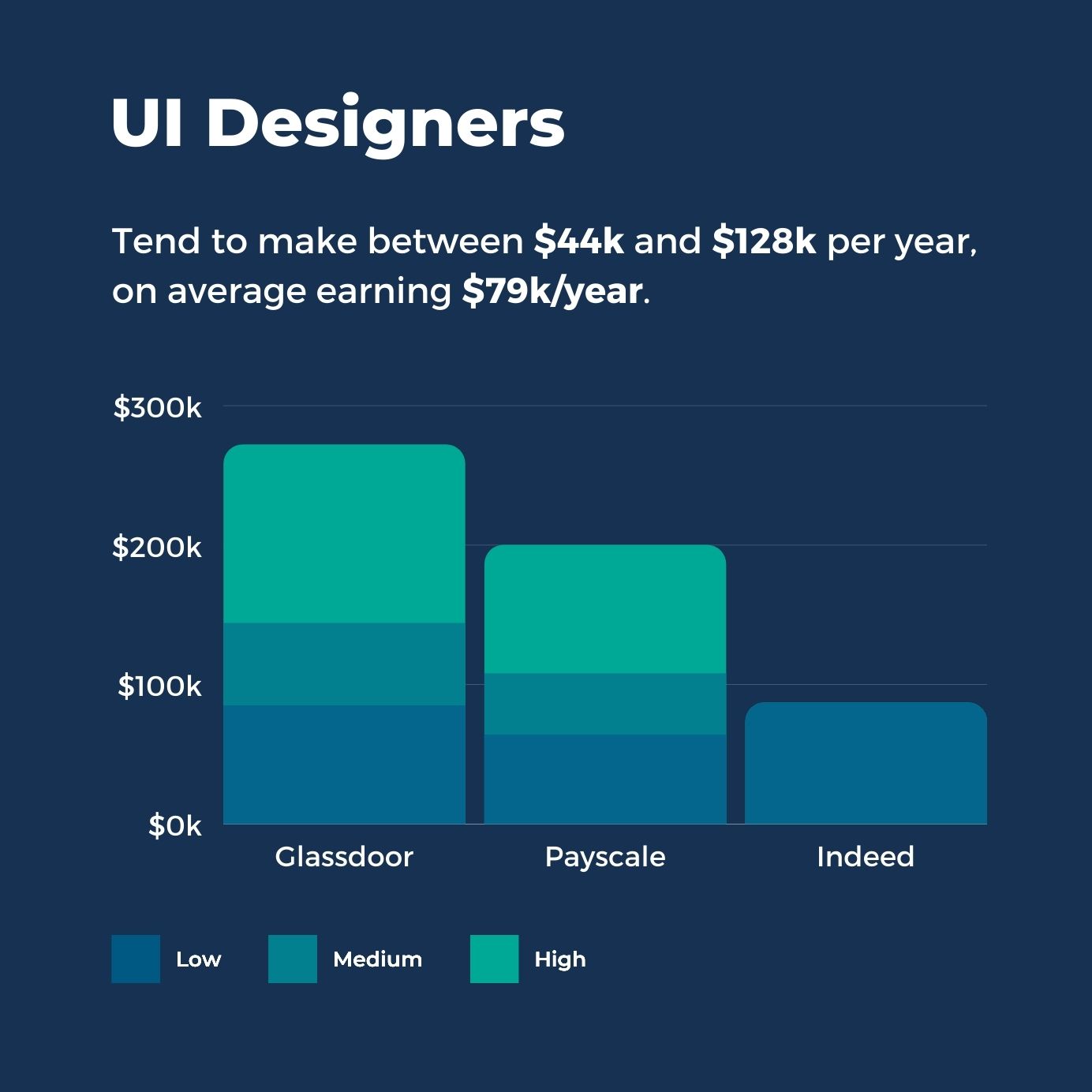 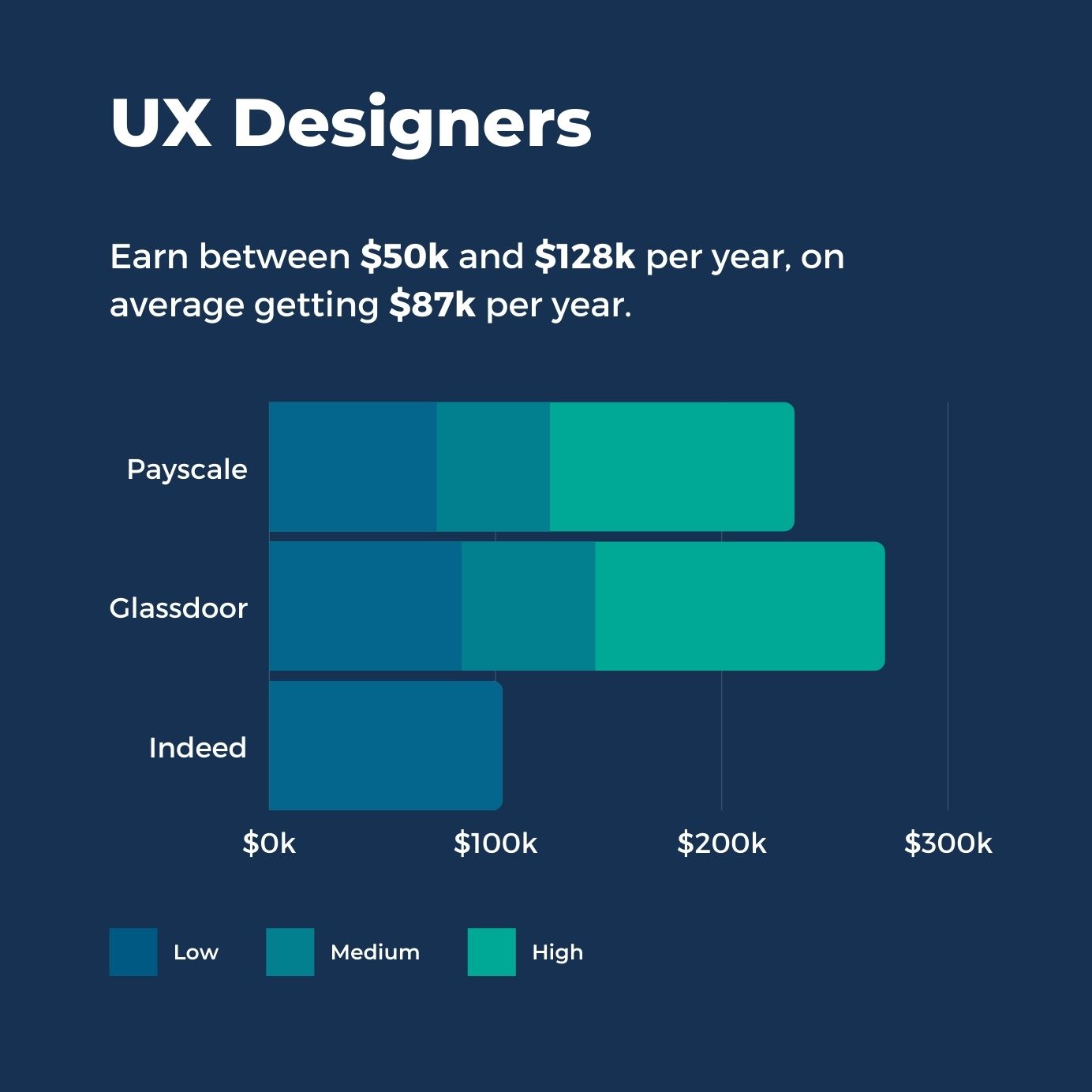 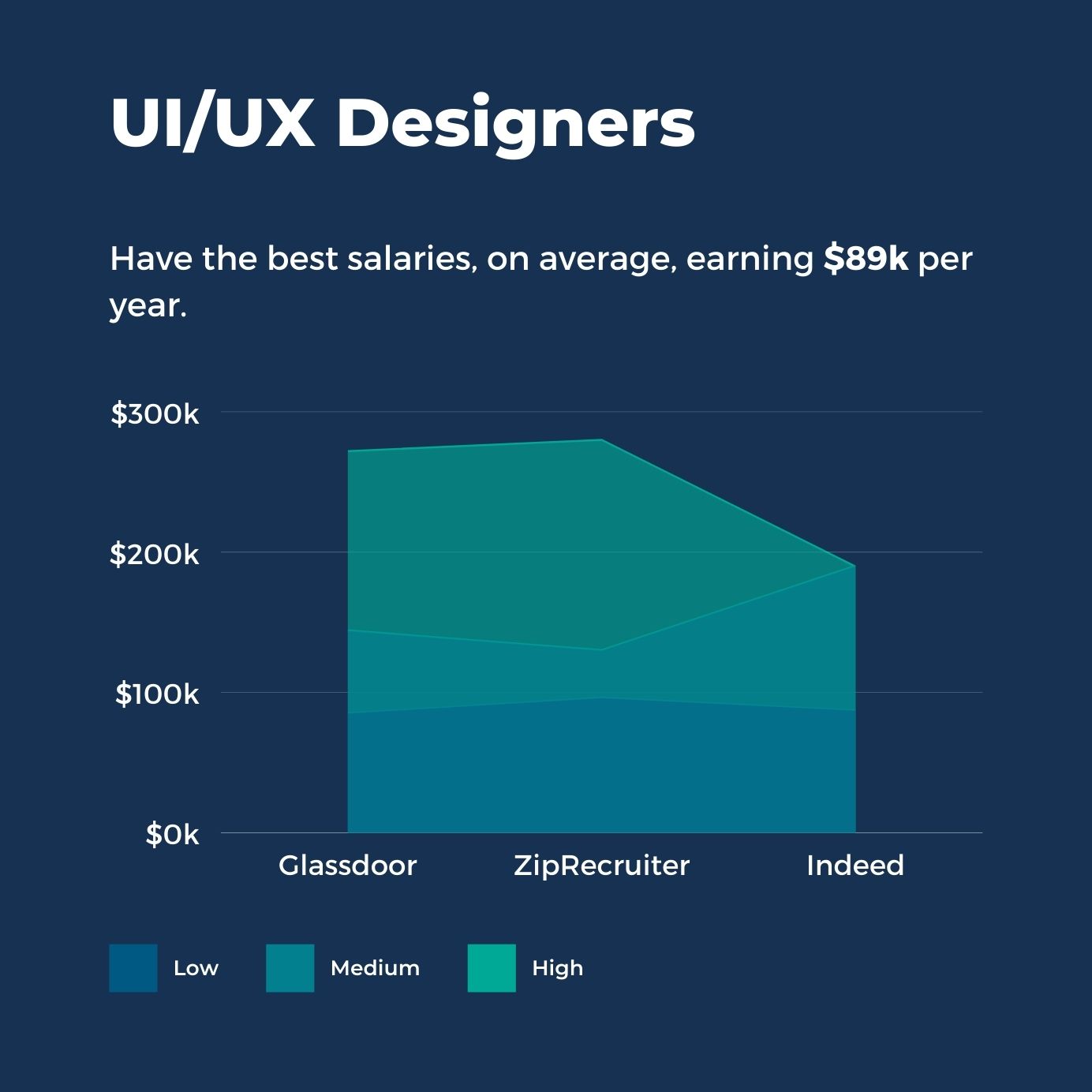 UI/UX designers have the best salaries, on average, earning $89k per year.

Although on average, web developers earn higher salaries than web designers, the pay differs based on their specialization.

Developers tend to make more money than designers primarily because of their ability to write code in different languages. Coding is a highly valued skill in the modern, tech-driven world, but not all programming skills are valued equally.

On average, a web developer in the US makes between $65k-$75k per year. Let’s take a closer look at the average salaries for each role. 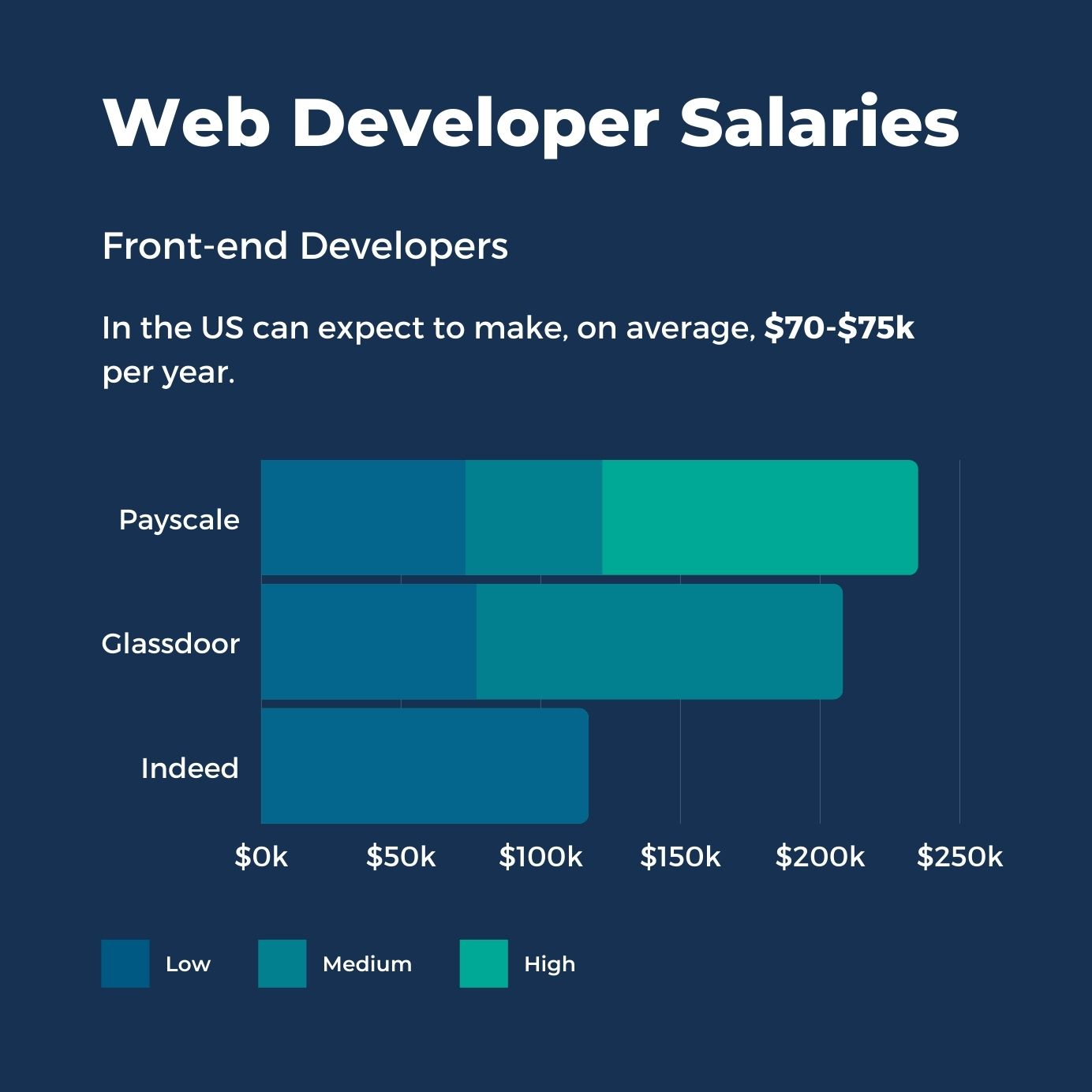 Front-end developers in the US can expect to make, on average, $70-$75k per year. 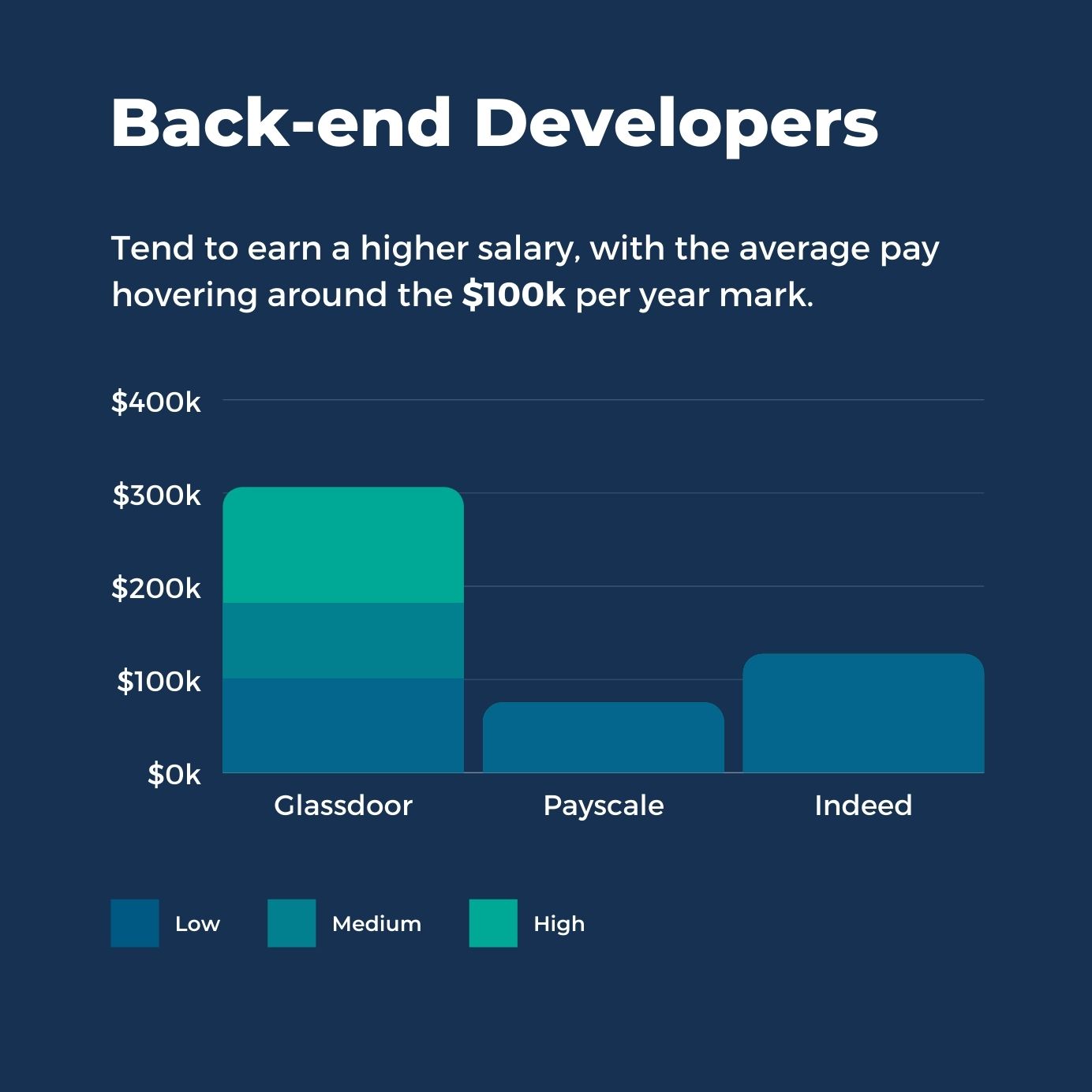 Back-end developers tend to earn a higher salary, with the aver1age pay hovering around the $100k per year mark. 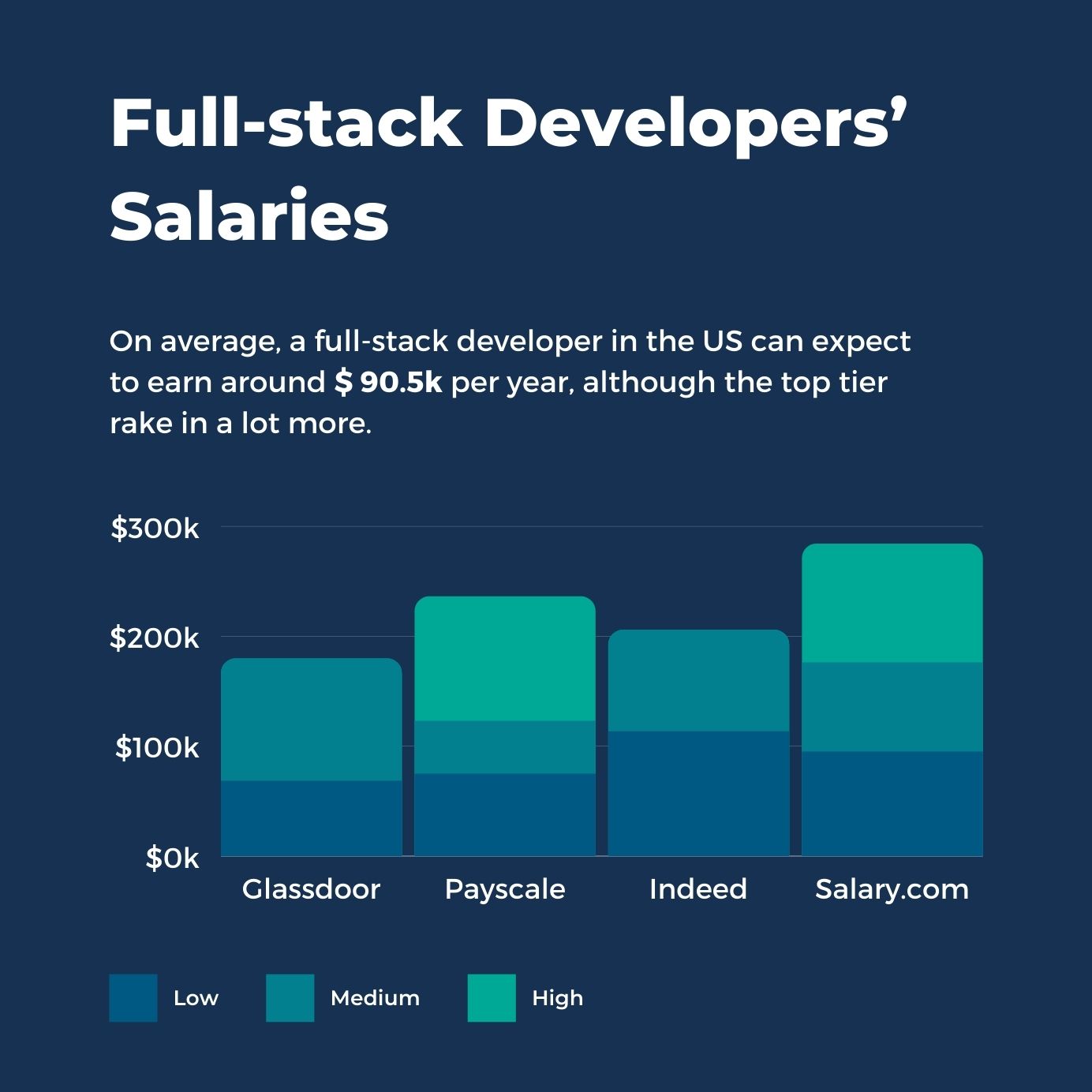 Full-stack developers’ salaries vary significantly, possibly because there are fewer specialists with this range of skills. On average, a full-stack developer in the US can expect to earn around $90.5k per year, although the top tier rake in a lot more.

Naturally, the better you are at your job, the higher salary you can command. With technologies changing so fast and new programming languages emerging every year, web developers must continue learning and adding new skills to their portfolio to ensure an upward trajectory in their salaries.

How to Learn Web Design and Web Development

Now it’s time to cover where and how to learn web design and web development.

Get a Formal Degree or Get Certified

If you like learning in a structured, offline environment, one of the more traditional routes of education could be the right option for you. Both design and web development learning programs have a lot to offer; you just need to know which profession you want to pursue.

The advantage of getting a formal education is that you graduate with a degree or an official certification, which can be quite the door opener when job hunting. Structured, teacher or instructor-led courses can help those who are starting from zero.

The downside, of course, is the cost of traditional education as well as the restrictions of your location. If you’re eager to get into a physical classroom, consider and research the options available in your area.

Some of the world’s top web designers and web developers are self-taught. Learning on your own has many benefits: you get to learn in your own time and in a way that fits your schedule. Plus, with the Internet being a free resource, you can educate yourself without incurring any student loan debt.

There are hundreds of free and paid design and development courses online that can teach you everything from design fundamentals to server-side coding languages.

Where do you start?

Here are some top recommended resources for a junior designer and developer:

To get the latest, best quality web development and design tutorials and tips, join the WebsiteSetup newsletter and start learning as you go.

To Sum Up: Should You Hire a Web Developer or Web Designer?

Hopefully, this guide has provided you with insight into the key differences between a web developer and a web designer. So, let’s recap on what we’ve covered so far.

If you need someone to create visuals for your website, including the brand style, layout, information flow, and user interfaces, you’ll be looking to hire a web designer. Like an architect, the web designer will develop a vision for your website: the look and feel, the stand-out elements, and the must-have functionalities for a seamless user experience.

When you have the mockups and wireframes provided by the web designer, you’ll need a front-end web developer to code them up. Using one of the front-end coding languages, the front-end developer will turn these designs into a functioning website – you’ll have clickable, scrollable elements, site navigation, and content styling that matches your brand guidelines.

You might then need the help of a back-end developer, who will take care of all server-side programming, third-party integrations, and programs that are necessary to power a website’s server and database.

Alternatively, you may look for a full-stack developer who understands both front-end and back-end processes and can build effective programs needed for a website. If it’s a small project, they can probably write all of a site’s code by themselves.

And that’s how you decide who to hire for your project – easy, right?